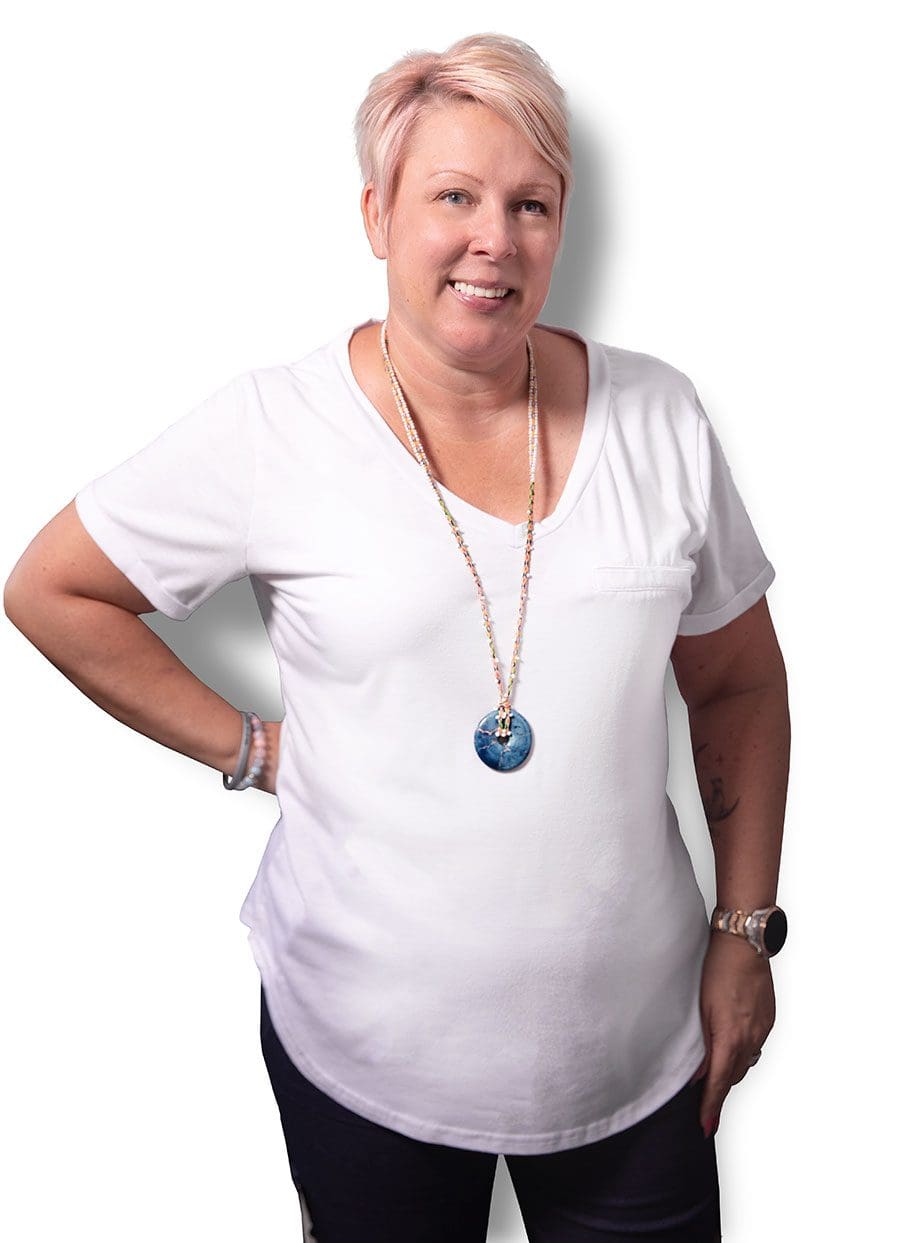 Titanic victim probes depths of mind to uncover past life experiences and lead those hurting to present-day solutions.

Sarah Riley’s fear of deep water caused her to feel moments of severe anxiety, and she didn’t know why.

“The fear was quite bad,” says the Sorrento resident, recalling she had panic attacks flying over the Atlantic Ocean near New York when she was heading to England, her homeland. “Every time I went back, it was getting worse. The last time I had gone I had to take a Xanax before I got on the plane, and I’m not like that.”

Her fear of deep water was explained when Sarah was hypnotized in a past life regression session.

“And would you know, I drowned on the Titanic with my husband, and it was the most terrifying experience,” Sarah says of the past life images she relayed from her subconscious mind of being 53-year-old passenger at the time. “We were holding onto this piece of wreckage and as my soul was leaving the body I was rising up, looking down in an aerial view, and all you could see was water, and it (the wreckage) was just a tiny speck.”

The Titanic sank in the wee hours of April 15, 1912, after the ocean liner struck an iceberg in the Atlantic Ocean, resulting in the death of more than 1,500 people.

“I always found the movie ‘Titanic’ difficult to watch and now I know why. As soon as I realized where that (fear of deep water) comes from, the fear went away because I realized that is not relevant anymore,” says Sarah, who is among the 33 percent of American adults who believe in reincarnation, according to 2018 Pew Research Center analysis.

“Some clients learned on Dr. Oz that hypnosis could work for pain management,” says Sarah, adding that hypnosis can help a client “get to the root cause of what is going on.”

Sarah has aided others discover the source of their problems for 18 years. Trained at the Florida Institute of Technology in Tampa, she is registered with the American Council of Hypnotist Examiners and became qualified as a Quantum Healing Hypnosis Technique practitioner. QHHT is a modality the late Delores Cannon developed to access the higher self, gain insight and deep knowledge, and explore past life patterns and karma.

“I love my job,” says Sarah. “What usually happens is most people might come for regular hypnotherapy and after we kind of start clearing stuff and start finding out more about themselves, and I start educating them because I am a spiritual teacher, so it brings up a lot of conversations about ‘why am I in this same relationship like four times now?’”

“Clearing stuff” begins with Sarah asking the client about his or her beliefs about God, the universe, reincarnation and asking, “‘Do you think we only live once or that we might come back again and again?’ Depending on the answer depends on what information I can then give them,” Sarah says, adding she doesn’t talk about past lives if people are not open to it.

“All we are accessing is a part of you that hasn’t been heard or that does not have a voice,” Sarah notes on her website www.hypnoteyes.me, adding that a certified hypnotherapist can help a person transform a memory that may be causing problems.

“The mind contains unconscious memories that generally are responsible for our decisions, attitudes, feelings, and behaviors, the memory should be dealt with accordingly and will no longer cause a problem,” she says.

When Sarah assists clients through a past life regression, she says they are disassociated from feeling pain or emotions during the hypnosis session.

“You have already survived the event, and we go back in time,” she says, adding that clients relate scenes they are seeing and tell her what is going on.

Life purpose is a topic often delved into during a QHHT session. “What am I supposed to be doing, should I be learning anything new? It’s especially good if you are at crossroads and thinking, ‘I don’t know what I should be doing next.’”

Clients often want to know why they are having issues with a family member. “You can ask about soul contracts, when the soul starts choosing the lifetime, sometimes there is an agreement between the two souls to come together for this (life) experience. One is teaching and one is learning. We can find out about that,” says Sarah, who also uses a section of QHHT to do a subconscious body scan for health and physical wellness.

“I get my client to list down everything that is wrong with them physically and I go through every one of those.” She then asks questions to pinpoint the reason for the ailment. “The body is always communicating with you, but you don’t know how to read that. We know in classical clinical hypnotherapy, emotions happen first and then the body will manifest the problem to try and say, ‘Hey, there is a problem.’ …. I can tell what someone has and what’s going on pretty much. The good news with that is (QHHT) can resolve any of those issues at root cause and it can be completely gone.”

Sometimes there is a life purpose issue with a health issue. Sarah says she strives to reduce the amount of pain and suffering the best she can during a session.

Sarah says hypnosis may provide answers when a doctor prescribes medication for a health woe and higher dosages are not working. In one case, she received a doctor’s referral and permission from Florida Hospital to do clinical hypnotherapy with a kidney transplant patient.

“All transplant recipients need hypnotherapy without a doubt. My client had lived a life of being very ill. She wasn’t supposed to live beyond age 2 from multiple problems. The kidney had been transplanted but it wasn’t putting out any urine. It was making her ill,” she says.

During hypnosis in the patient’s room, Sarah says she talked to the kidney, asking if it was grieving the previous person. “No, it was time for me to go.” Damaged during the transplant? “No.” Plugged in properly? “Yes.” Feeling guilty being in the new body? “No.”

Sarah then asked: “So, what’s the problem?”

She learned the kidney didn’t want to be in the hospital. Sarah advised the organ to “just let go,” do what it’s supposed to, and then the patient would be able to leave the hospital.

“Once I said that the (urine) bag began to fill up,” says Sarah, adding the moment gave her goosebumps. “We talk to the organs, talk to the system, talk to the blood, and talk to the nervous system. The have their own consciousness, and I was really pleased to help her because she has been through so much.”

She also has assisted several cancer patients in their medical treatments. “When you are in a fight or flight situation, the immune system will be damaged or the digestive tract, and that is why some people get cancer and some people do not. The people who get cancer tend to be people who worry a lot about things in life, been on the receiving end of an unpleasant relationship or a lot tragically has happened in their life, and that is how that kind of manifests.”

Sarah adds it was thrilling to help two women get pregnant via hypnotherapy by releasing the emotional block of unworthiness both were feeling. “The belief had gotten in there of ‘I must suffer to the end of the earth for every piece of happiness that I think I deserve.’”

“The mind controls everything,” says Sarah, adding that many clients have thoughts of being unworthy. “There’s always an event that happens in childhood and it’s what you concluded about yourself at the time of the event that gets stuck. Feeling unworthy causes everything else to go wrong: anxiety, depression, panic attacks, eating disorders, manifestation of illness.”

Sarah helps clients go back to their childhood to discover “what did you conclude that was wrong? We have to reprogram the event from an adult perspective because you’re now an adult,” she says, adding often time the conclusion of being stupid or unworthy is stuck in the subconscious from comments they heard from a parent or in school.

Hypnotherapy is often noted as a tool to help smokers quit the habit or lose weight.

“I don’t treat people for weight loss, I treat them for the weight gain,” she says, of getting to the root of the gain or inability to keep weight off.

“There is a lot of sexual abuse that happens with women and subconsciously they want to be invisible to men,” says Sarah. “If there is a group of women walking down the street, men are going to be looking at the blonde hair, blue eyed woman with big boobs and a small waist. … The bigger you are, the more invisible you get, plus it is a physical barrier of someone being able to get next to you, and that is why women often fail to lose weight. The ego wants to lose weight, and begins doing really good, but the inner child that was damaged feels very vulnerable.”

Sarah recalls treating an injured, patriotic military veteran who was living a life of pain and suffering in his current life and the same in a past life.

“His verbiage was ‘I don’t care if I am in agony, I just want to be alive.’ The things we say to ourselves, things we hear, we live it. He was saying that when he was passing away (in his past life) and if you are not at peace when you are passing away, you can drag that problem into another lifetime,” says Sarah. “He is doing so much better now. So, it is like your passing thought really can impact the next lifetime and that’s why I work so hard to bringing people to peace in their lives for that reason.”

Sarah says QHHT has “so many multiple layers of healing,” and she records her sessions.