In Lake County, a set of twin first responders are ready and raring to save the day, but can you tell them apart?

As kids, twin brothers Zach and Austin Sullivan frequently caused confusion since they looked so very much alike.

“They (the twins) went to a Montessori school in Leesburg and every morning the teacher would greet the students, so one day she greeted Zach and he went to his desk but then there comes Austin, which confused the teacher. She said she wondered how Zach had gotten out without her noticing,” Paula Sullivan, Zach and Austin’s mother, recalls with a chuckle.

Zach and Austin could pass for each other, but what really stood out was the tight bond they shared, how they loved spending time together and always looked out for one another.

“They always did well on their own in the classroom, but the teacher said they would always find and go straight to each other at playtime and just stay together the whole time,” Paula says.

Paula adds, “They were very different in their own ways, but they were very close and in tune with each other.”

Yet they had their own tastes and personalities.

Growing up, Austin, the older twin by one minute, with his Type-A personality and preference for trendy clothes from places like Hollister, was considered the family’s “city boy.” Zach, who was calmer, laid back, and perfectly happy in Levi’s jeans and boots, was considered their “country boy.”

Today, the 28-year-old Sullivan twins continue to have much in common… yet they are distinctly different.

The brothers still look very much alike, which on occasion causes confusion at work. However, they live very different and separate lives. For instance, they have different hobbies – Zach likes bow hunting and Austin enjoys flying drones. Still, they talk every day without fail, and still look out for one another.

To top it off, they are both first responders, a profession both got into on a whim, but their different taste in clothing has never been so pronounced. That’s because Zach wears a Lake County Sheriff Office (LCSO) deputy uniform, and Austin sports a Lake EMS paramedic’s uniform.

The brothers are Lake County’s only known twin first responders.

“There have been brothers and sisters, but there are no other twins that I know of,” says LCSO Sgt. Dave McDaniel, Zach’s supervisor.

“I had a person come to me and say, ‘I didn’t know Austin left to become a deputy,’ and I personally had to do a double take one day when I saw his brother in a deputy uniform on the side of the road doing some work on a call,” Simpson says.

Zach and Austin say they personally don’t think they look that much alike. They find humor in such incidents.

“We work different sides of the county, but in the past, we have been on a couple of calls together and you can see the weird looks on people’s faces and you can tell they want to say something,” Zach says.

They both, however, understand how people who don’t know them well could confuse them.

“It’s just a feeling I get sometimes like I can sense something about him or that something is going on with him.”

“Austin is a little taller and has a little more weight on him, but people who don’t see us every day definitely do double takes. If he could wear my uniform, I guess he would look a lot like me,” Zach says. He then added: “I’ve had firefighters talk to me like I was their friend and I’ve finally had to say, ‘I have no idea who you are.’ Then they realize that, ‘Oh hey, it’s his brother.’ Austin has similar stories. 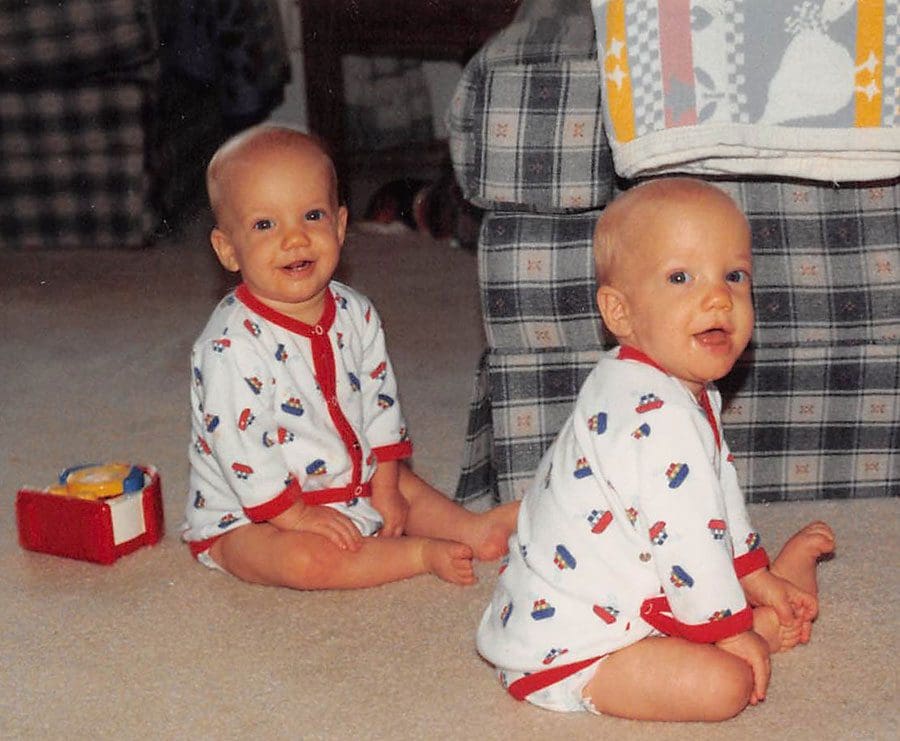 So how can you tell who’s who? Zach shares a few secrets: he is right-handed, Austin is a lefty, and now has a full sleeve tattoo on one arm. And just a couple months ago, he started wearing glasses.

People who know he has a twin continue to tell Austin that they saw his brother. What really gets him is when people ask him what it’s like having a twin.

“I say, I don’t know what it’s like NOT having a twin,” Austin says. “When you have siblings who are older or younger you kind of grow up in different timeframes, but it’s never been that way for us, so I wouldn’t know. We’ve just always been close and I remember us always doing everything together.”

Zach, previously an equipment operator in the construction industry, has been with the LCSO for about two-and-a-half years.

He says he didn’t really plan on changing professions. “Everybody has a story on how they got into this, but I kind of just woke up one day and thought it would be something I’d be interested in. There’s really no rhyme or reason for it, just maybe that I have some friends in the business and they said, ‘Yeah, you should go ahead and try it,’” Zach says. “Austin being a paramedic kind of had something to do with it too, but being a firefighter or paramedic were both things I didn’t want to do, and since basically there are three lines of service as a first responder, that left law enforcement.”

Austin, at one time, planned to join culinary school. Like his brother, he hadn’t planned on becoming a first responder until one day while driving down the road.

“I really don’t have any rhyme or reason. I was on the intersection of Picciola and 27 (near Fruitland Park) and I saw an ambulance with its lights and sirens go through the light and I said, ‘Hey, I bet that’s a fun job,’ and the next week I signed up for paramedic school,” says Austin. “I worked for an EMT crew for one year, then went to medic school for two years and became a paramedic.”

Both brothers are glad they followed their gut. Both feel they’ve found their calling.

The only thing that worries them is the climate between the public and law enforcement these days, though in Lake County, they say it’s not as bad as in other parts of Florida or other cities across the country.

“We’ve just always been close and I remember us always doing everything together.”

“Doing this job takes a toll on you. We see things that most people will never see in their lifetime and we hear things that most people will never hear. There are also a few things you sacrifice, like holidays, sleep, family life and social life, but I like helping people. Most of the time, you deal with people on their worst days, but when you are able to make a difference in somebody’s life, it makes you feel really good,” says Zach.

Austin says, “The way you learn to look at it is that on people’s worst days, we’re there for them, so you do have the potential to make a life-saving difference in their lives. I enjoy working in the field.”

For the moment, Austin does not have a family of his own to juggle into the equation. Zach has a wife, Courtney, (though she understands the law enforcement life since she is a Tavares police officer) and Everleigh, their three-month old daughter, to consider.

Regardless of what they do or how busy life gets for them, Zach and Austin find time to call one another every day.

They also stay connected while out in the field, by “listening out for each other” on emergency scanners of each other’s agencies.

Most of all, they try to always heed their gut when it comes to feelings they may get about one another. And that’s nothing new. An elementary school science project on twin telepathy they worked on together suggested their intuition was on point.

“Sometimes you get a feeling about something and you just have to call the other one. I don’t know how to explain it, but nine times out of 10, one of us will call the other, and the other one will say, “I was about to call you too.”

Paula says sometimes she can feel how strong their bond is when listening to them talk to one another.

“You hear people talk about twin bonds and with them, it’s just incredible,” Paula says. “You can tell they are in tune with each other, they’re very intense, and if they are talking, it’s very hard to break into their conversation and they literally finish each other’s sentences.”

Zach says, “It’s hard to explain, but it’s not like I am thinking about Austin all the time, it’s just a feeling I get sometimes like I can sense something about him or that something is going on with him.”

Overall, Paula says she is happy to see that Zach and Austin have remained close as adults, adding that she, her husband Keith and their youngest son Mason are proud of what the twins have become.

“The mindset of a first responder is to help people and to know that both of them have chosen to go into that field makes us very proud,” Paula says.