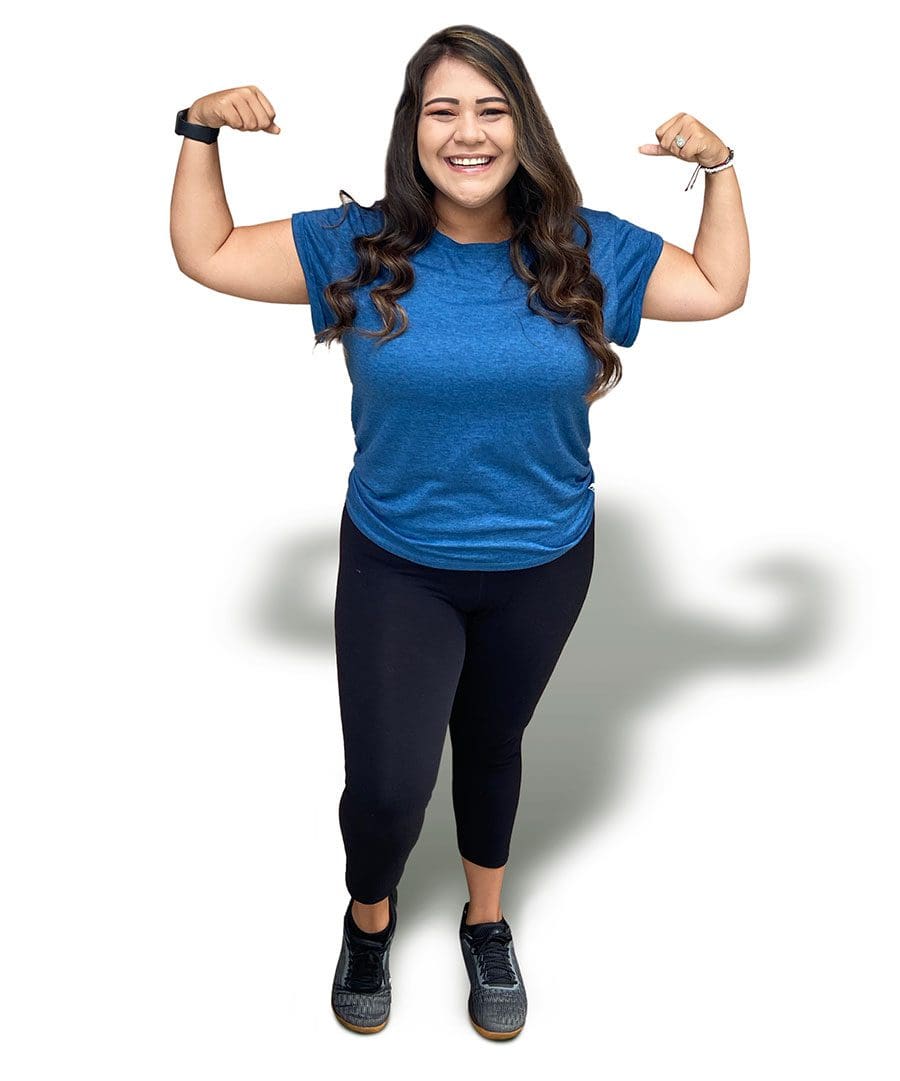 Several years ago, Angie Dolan desperately needed to get something off her chest. It was more than 100 pounds of unwanted fat.

Weighing nearly 300 pounds, she needed to have a heart-to-heart conversation with herself about the unhealthy habits that led to diabetes, sleep apnea and polycystic ovarian syndrome at the young age of 22. A trip to her doctor revealed another grim prognosis. Her obesity might hinder her chances of having a successful pregnancy.

“At that point in my life, my eating habits were horrible, and I hadn’t been to a gym or really exercised in a long time,” she says.

With her life mired in despair, Angie, a resident of Tavares, decided to chart a new course.

She joined a gym, enrolled in a CrossFit class and meticulously tracked all foods she consumed. Before long, these healthy habits became ingrained in her daily routine.

Three years later, she is now living large, and it is all because she made the life-changing decision to downsize. After losing 115 pounds, Angie no longer requires a CPAP machine to breathe while sleeping, has reversed her diabetes and has gone from a dress size 24 to size 9.

There’s more good news. The 25-year-old is now 16 weeks pregnant with a baby boy whom she has already named Noah.

Lake and Sumter Style talked to Angie about her incredible transformation.

When did you first realize your weight was out of control? In May 2017, my husband, Andrew, and I were trying to get pregnant. It wasn’t happening. I went to a doctor. I was already using a CPAP machine for sleep apnea, and he told me I was a Type 2 diabetic and had a mild case polycystic ovarian syndrome, which means there are cysts on my ovaries. He said I might not be able to have kids because I was obese and told me that the only way to get rid of these medical problems was to lose weight. It was a wake-up call for me.

You were only 22. How did you react to having all these medical conditions at such a young age? I knew things were bad. After turning 21, I gained between 60 to 70 pounds because I had gotten to a place mentally where I didn’t care about being overweight and just kept eating and eating. I could feel my health deteriorating, so when the doctor told me those things it reaffirmed what I already knew. But yes, hearing those diagnoses come from a doctor adds a bit of fright.

You said you had gotten to a place mentally where you didn’t care about being overweight. Can you elaborate? Andrew always accepted me for who I was, even when I was at my biggest point. Also, my family and friends never shamed me for being big and eating bad. Therefore, I became comfortable eating whatever I wanted in front of people. Some obese people are not like that. They tend to eat significantly less when eating around other people.

“Food definitely gave me a feeling of satisfaction. It made me happy and took my mind off things..”

How much could you eat? I could eat a whole Publix sub and sometimes two bags of chips. For lunch, I would go to McDonald’s and order three double cheeseburgers, large fries and a large Coke. Nighttime would roll around and I’d become bored and satisfy that boredom by eating. I do think I had an eating disorder but was never diagnosed with one.

Did food bring you emotional happiness? Food definitely gave me a feeling of satisfaction. It made me happy and took my mind off things. Once I completed a meal, I thought, ‘Well, dang. I kind of want to eat again.’ That’s why I think I had an eating disorder.

Let’s go back to the day you visited your doctor and received the bad news. You said it was a wake-up call. How so? I remember that day like it was yesterday. I cried in my car and couldn’t even go to work that day. I cried knowing I had diabetes and might not be able to have kids. Something clicked in my brain that I had to change. That very day, I threw away all the bad food in my house and joined Planet Fitness.

Did you have a hard time transitioning from an inactive unhealthy eater into an active healthy eater? It wasn’t as hard as I thought. I slowly started working out and eating healthy and became addicted to living this new lifestyle. Before long, I found myself working out five or six days a week.

How long did it take for you to notice results? The first year I lost between 35 and 40 pounds but didn’t really feel a lot of change in my body. The second year, I hit this huge wave of motivation and joined a CrossFit class and absolutely loved it. Being around other fit people really motivated me and I ended up losing between 40 and 50 pounds. This past year I’ve toned up a lot by building muscle and strength.

Tell me about changing your eating habits. At first, I tried several fad diets and did not enjoy them as much. Then I switched to Weight Watchers. That allows me to still eat food like potatoes, pasta and sandwiches without totally depriving myself. It’s all about eating foods you enjoy in moderation without binge eating. But for the most part I eat chicken, beef, vegetables, fruits and fat- and sugar-free food. It’s OK to eat foods you like as long as you track what you eat.

How has coronavirus affected your workout regimen? I did have to put CrossFit classes on hold. However, I still do CrossFit-style workouts at home. I’ve also been doing a lot of yoga and running around my neighborhood. Typically, I run about three miles. Now that I’m pregnant, I want to make healthy choices because that way I’ll know if I do gain a lot of weight it’s all because of the baby.

Tell me how you feel today versus three years ago. Sometimes it’s hard to think how I felt back then and what made me feel a certain way and how I fell in this dark place. Now, I’m just so happy. Every day is a great day to be alive. I always remind myself that I’ve come too far to ever go back to where I was. Since I’ve been pregnant, I asked my doctor to examine my bloodwork, and the results came back that I’m completely healthy. It’s bittersweet.

Get to know Angie

Advice for anyone beginning a weight-loss journey: Have accountability, whether it’s a group, a friend, your parents. You need someone to help you stay on track.

Favorite workout music: Hard rock. It puts me in this head space where a flip switches and I have all this energy.

Your refrigerator is currently stocked with: Unsweet almond milk, water, chicken, ground turkey and lots of fruits and veggies.

Future plans: I am currently attending the University of Central Florida to earn a bachelor’s degree in psychology. I saw a psychologist after my parents divorced when I was in second grade. Seeing the way they helped me makes me want to help other children.

Hobbies: Going to the beach and hanging out with my dogs: Lilly, a miniature shih tzu, and Storm, a pit bull.